In this blog post, I will give an introduction to a hashing methodology called Linear Hashing.

A hash table is a well known in-memory structure that supports key-value access with lookup cost being amortized O(1). The hash table is just an array, and each location/index in the array stores a <KEY,VALUE> item. The data structure is accompanied by a hashing function that maps a given key K to the table index that stores the value V for this key.

It is quite possible that multiple keys hash to the same location (aka bucket) in the hash table. If this is the case we have a collision, and this affects the performance of both insert() and lookup() operations in the hash table. Typical collision resolution strategy is chaining where each bucket in the hash table array has a chain (basically a linked list) of overflow buckets. Let’s say we wish to insert key K2 at bucket B ; B = h(K2) where “h” is the hash function.

If there is a collision at bucket B, implying some other <K1, V1> pair already exists there, following steps are followed to store the desired new item <K2 ,V2>.

The length of the chain at any given bucket will obviously impact the cost of lookup() for keys hashing to that bucket because it requires a search through the chain. It will usually not affect the cost of insertion since a new item can always be inserted by creating and linking an overflow bucket at the head of the chain. But, if some sort of ordering on keys is required, then cost of insert() will also increase.

So it is imperative that hash table is of optimal size. An under sized hash table can quickly lead to degradation in performance if the per-bucket chain length is high. On the other hand, if we over provision the memory for hash table, we suffer space wastage. Hence, dynamically changing the hash table size by adding more number of buckets, and rehashing the existing set of KV pairs using the new table size is an important operation on the hash table.

Linear Hashing technique is a dynamic hashing scheme. It allows the hash table size to grow in a linear fashion ; one bucket at a time, and that is where the method gets its name from. At any given point of time, this method works with at most two hashing functions. The hash function changes its nature underneath dynamically and the hash table algorithms take care of using the right hashing algorithm for insert(), lookup(), remove() operations on a given key.

Linear Hashing uses the chaining or overflow bucket approach. This along with the fact that hash table size grows by exactly “one bucket” at a time are important facts about this method.

All of the above mentioned points will definitely become clear further in this post.

We will use MOD as hash function, and integers as the keys for the hash table.

Let’s start with a simple example where the hash table has 2 buckets numbered 0 and 1. Let’s have a restriction that each bucket can store 2 records (KV items) before we chain out an create an overflow bucket. Similarly each overflow bucket will store only 1 record before we create and link another overflow bucket to the chain.

Following operations are carried out:

Let’s go back to point (4) where it is mentioned about the usage of “I” LSBs from the hash function to determine the bucket index. Remember that:

These three things tell us that bucket index B for a given key K is really the LSB of integer key K. Let’s elaborate on this further by using the binary representation of the keys:

The highlighted bucket in the diagrams below represents the bucket pointed to by S.

Let’s look into split(). For that, we first establish that :

To trigger split, let’s do one more Put()

Get(2) => H(2) = bucket 0 which is incorrect because key 2 has been moved to a different bucket as a result of split of bucket 0. Hence, we need to use the second hash function to correctly lookup the key.

Hence, for insert () and lookup () into buckets that have been split, we need to use the second hash function H1().

What has happened ? We started out with 2 buckets 0 and 1. Both the buckets were split, and the hash table size grew to 4 buckets. This completes a single round of linear hashing.

At the end of a single round of linear hashing, all the N buckets we started with would have been split, and the size of hash table would be 2*N or doubled (but only 1 bucket at a time). S, the split pointer is reset back to bucket 0, and our H() becomes key%4. Since the hash table size is now 4, it tells that hash function needs to consider 2 LSBs for determining the bucket index. So “I” is now equal to 2.

This further tells that when we reach a point of splitting a bucket, H1() would be key%(2*4). In other words, instead of 2, 3 LSBs would be considered by the hash function to determine the bucket index.

Another round of linear hashing will start when bucket 00 (bucket 0) will split into buckets 000 and 100 respectively.

The Put() operation for key 12 causes an overflow in bucket 0. Hence we need to split the bucket pointed to by S, which in this case happens to be bucket 0. 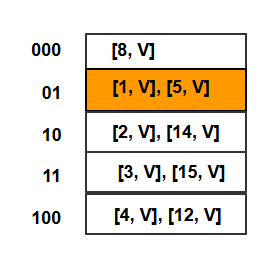 This completes the introductory explanation to linear hashing method. I would like to complete the post by giving pseudo code for insert() and lookup() algorithms.

The above pseudo code obviously glosses over creating and linking an overflow bucket during insert(), and searching through the overflow chain during lookup().

One important thing to note here. My examples kind of unintentionally show that when a bucket B is split and its contents are rehashed between B and B*, we seem to get rid of all the overflow buckets in the chain of bucket B. This is not true, and just happens to be the case here because of the keys I used in my examples. So, please do not go by the assumption that rehashing will get rid of the overflow chain. It is purely dependent on the key.